When I booked the trip to New York I knew I was going to spend a lot of time there shopping for makeup. To be honest I thought I was going to spend a lot more than I did. I’m not going to lie if I wasn’t so overwhelmed I probably would have. I even forgot one of the things I wanted the most, which was the pretty vulgar Blush I had on my shopping list. Now that I’m thinking about it I would have remembered had I seen anything from the brand, so I don’t think it’s sold in stores. Not the Sephora I went to anyway.

I feel so bad posting a haul without swatches. My AC is broken and it’s so hot everything was literally melting off my arms. And I really don’t want to miss an upload. I’ll probably do a full face of first impressions for most of the products and some individual reviews. Hopefully, I can even film it, I’ve been so horrible every time I’ve tried. 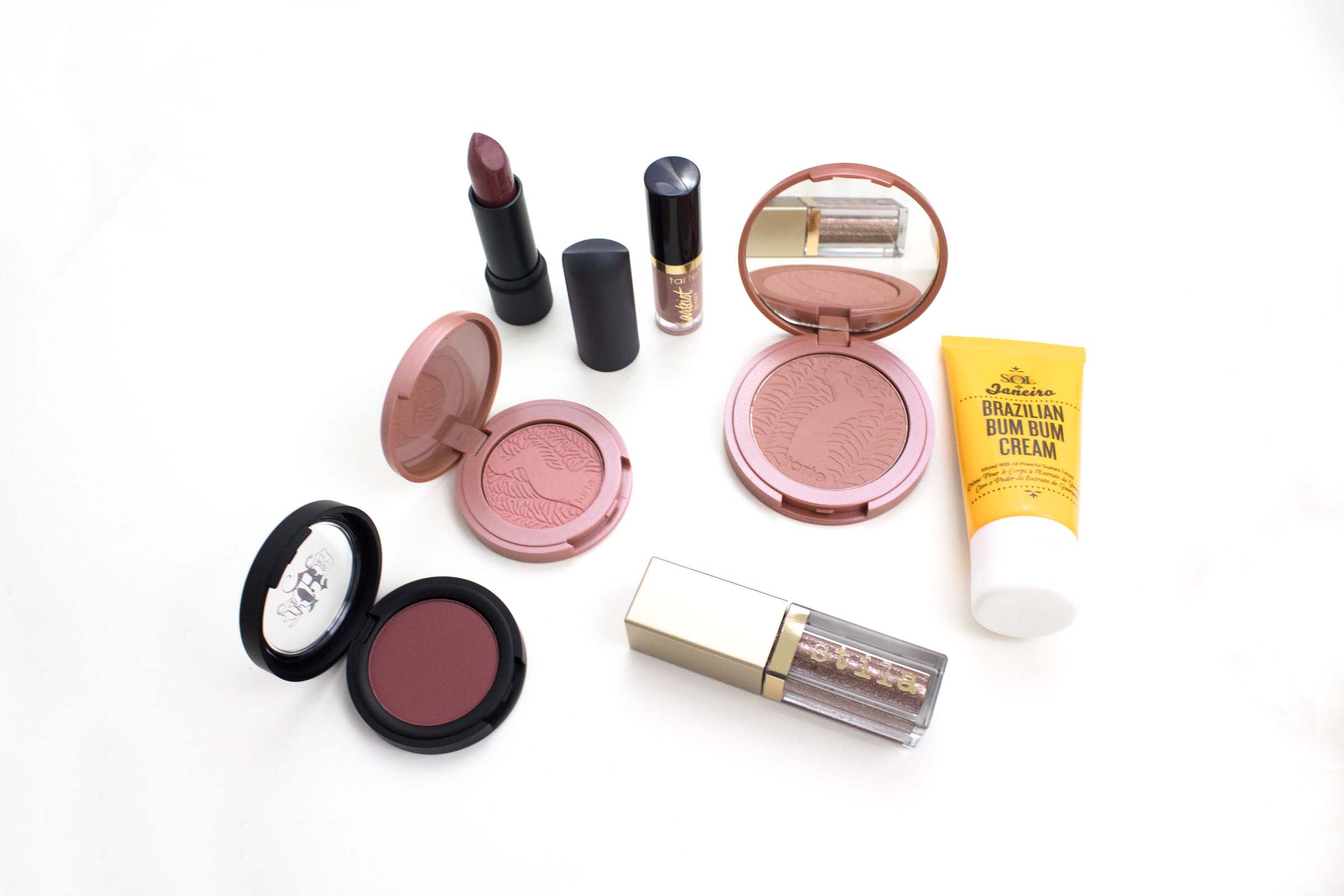 As soon as walked (apart from hearing angels singing) the Tarte display was the first thing I saw. I really wanted to get the Rainforest of the Sea Water Foundation, but decided against it for two reasons: my body reacted so well to being exposed to the sun that I looked like a lobster the whole trip, it would have been impossible to match me. And then what if I fell in love with it only to not be able to repurchase it again! So I went for another product that I’ve been eyeing for quite some time, that I know is going to last for a long time, the Tarte Amazonian Clay 12-hour Blush in the shade Seduce. I’m the worst on choosing Blush shades. From the selection, this was the one that looked the most natural on me, while still being able to show up.

Next was the Bite Beauty display which was even more though for me. Every shade in the Amuse Bouche range is gorgeous, but I wanted something that I can wear every day. The one that I wanted (Honeycomb) wasn’t in stock, so I got Chai, which is a really pretty mauve brown. Ideally, I would have gone for an everyday nude, but everything was way too pinkish for my taste. And I wear browny shades a lot more often than nudes anyway. Next, Stila. I could have bought all of the Magnificent Metals but I went for Smoldering Satin mostly because the tester was new so I could actually see what it looked like instead of the other empty ones. Can’t go wrong with gold anyway. This swatched so glittery and so pigmented I had to force myself from staring at my hand.

I almost forgot the last item, because it was in a different display than all the other products from the brand which I completely ignored. Thankfully I remembered and asked for it. I mostly wanted this for collection purposes, but the colour is so unique and pretty. Although I thought that it would be bigger since it’s advertised as a blush. I’m not sure I’m going to use for my face though because I feel it might be too dark.

The nicest Sephora employee I have met was at the cash register. When I told her I didn’t have the Sephora card because I live outside the US she was like “let’s do it now, so I can give you free gifts!!” And who am I to turn down gifts. So I also got the mini birthday set from Tarte and was able to choose a sample from a selection. Since I was debating getting the so highly hyped Brazilian Bum Bum Cream but didn’t (cause it’s expensive), that’s what I got. Shocked by the size of this one, as a free sample in my country consists of a little less than a pea size amount. 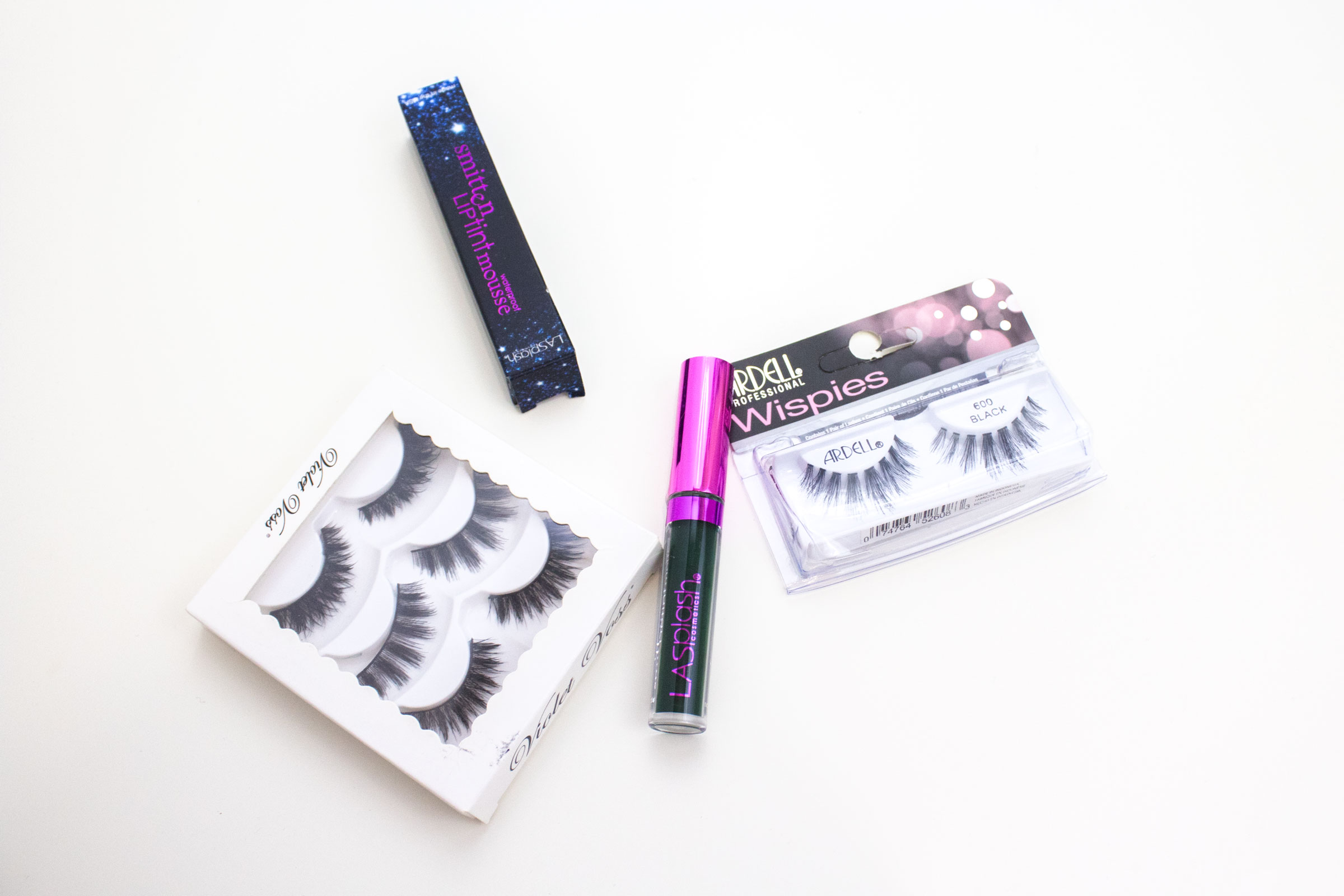 At Ricky’s I got one lipstick I’ve been dying to get since I discovered this line. This Smitten LipTint Mousse in Nagini (also known as Komodo) has been on my list for many reasons. The first being that I’m an avid Harry Potter fan, so obviously this is a must have for me. Plus, green lipsticks are something I rarely see, and as a weird lipstick lover, I couldn’t get this shade out of my mind. The formula doesn’t look like one I’d enjoy, but it’s not like I’m going to wear this every day.

My number one mission in the US was finding as many false lashes as possible. The Ardell ones were the same that I can get here and the price wasn’t too far off, so I only got the 600 Wispies. The Eye Believe in Unicorn trio was the only thing from Violet Voss they had, and it consists of individually unreleased lashes, so I thought I’d give it a shot. Unfortunately, they didn’t have any from House of Lashes, which I was keen on trying along with their glue. I stood for minutes in front of a wall full of Morphe Brushes, but resisted every impulse and got the E18. This is one of Jaclyn Hill’s favourite brushes, and I’m always in need of smaller detail brushes. I’m honestly really impressed by the quality (and the price!). It’s looking like I’m going to get a lot more brushes from them. 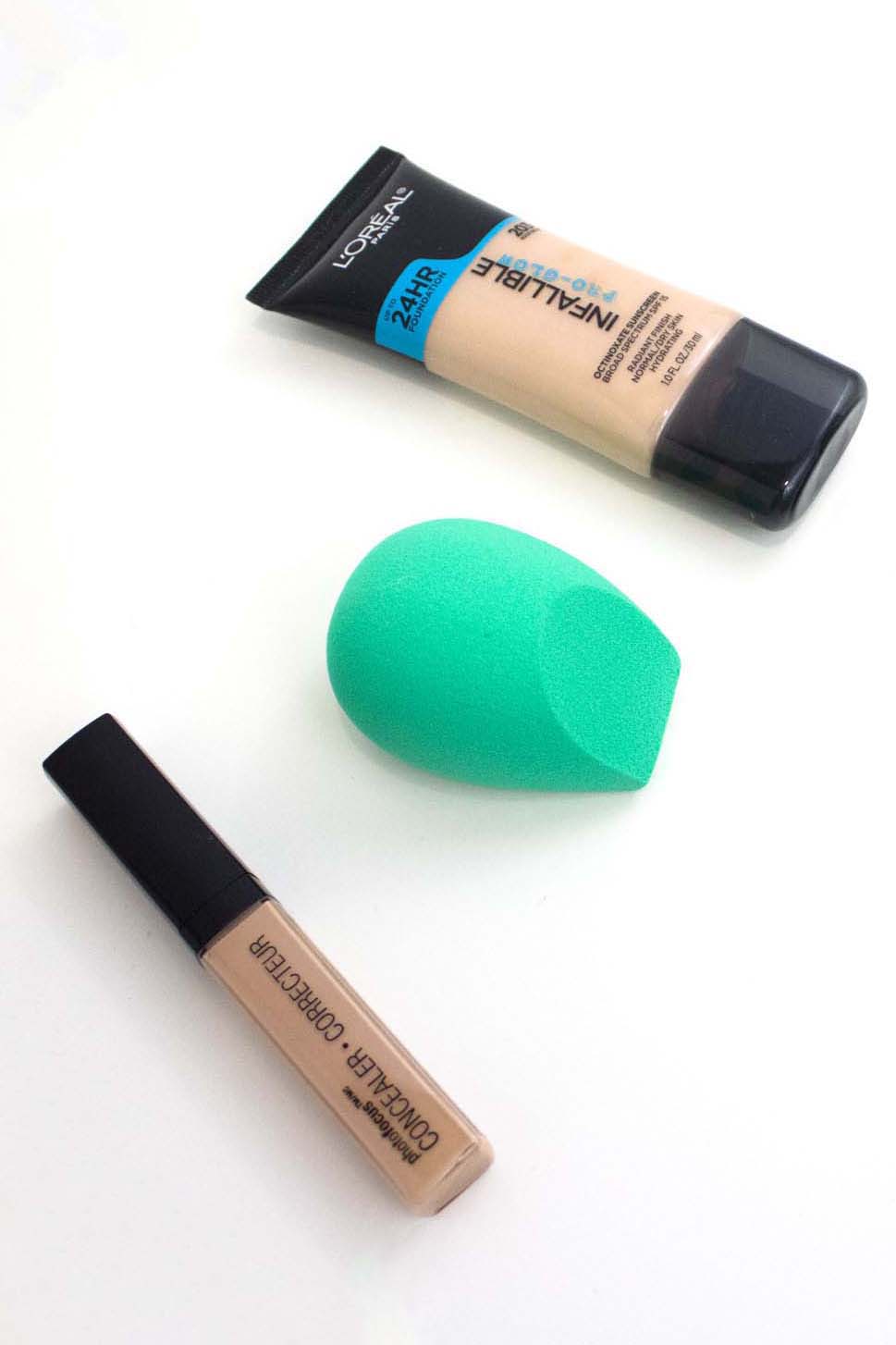 Strolling the drugstore for the necessary bottles of water, I also found a few interesting things. The Wet n Wild display looked like it had been raided in every store, so obviously no Photo Focus Foundation. But amongst the few things left I noticed the Photo Focus Concealer, which I thought I might as well try, even though I haven’t heard much about. The colour might be a tiny little too dark, but it was the lightest available (LLight/Med Beige).

Another thing on my must list that I did find is the L’Oréal Pro Glow Foundation. I might have gone a little too light for Summer. At this rate, I’m not going to wear foundation for the rest of the season anyway. We’re not going to discuss the fact that this was opened and was so close from dirtying my whole luggage in the foundation. (Why would you touch any makeup and leave it to others to buy, why????). Lastly, I got the EcoTools Sponge Duo, which I’ve been wanting to get since I heard Tati’s review. I hope I don’t like them too much though because I don’t know if can get them anywhere else. 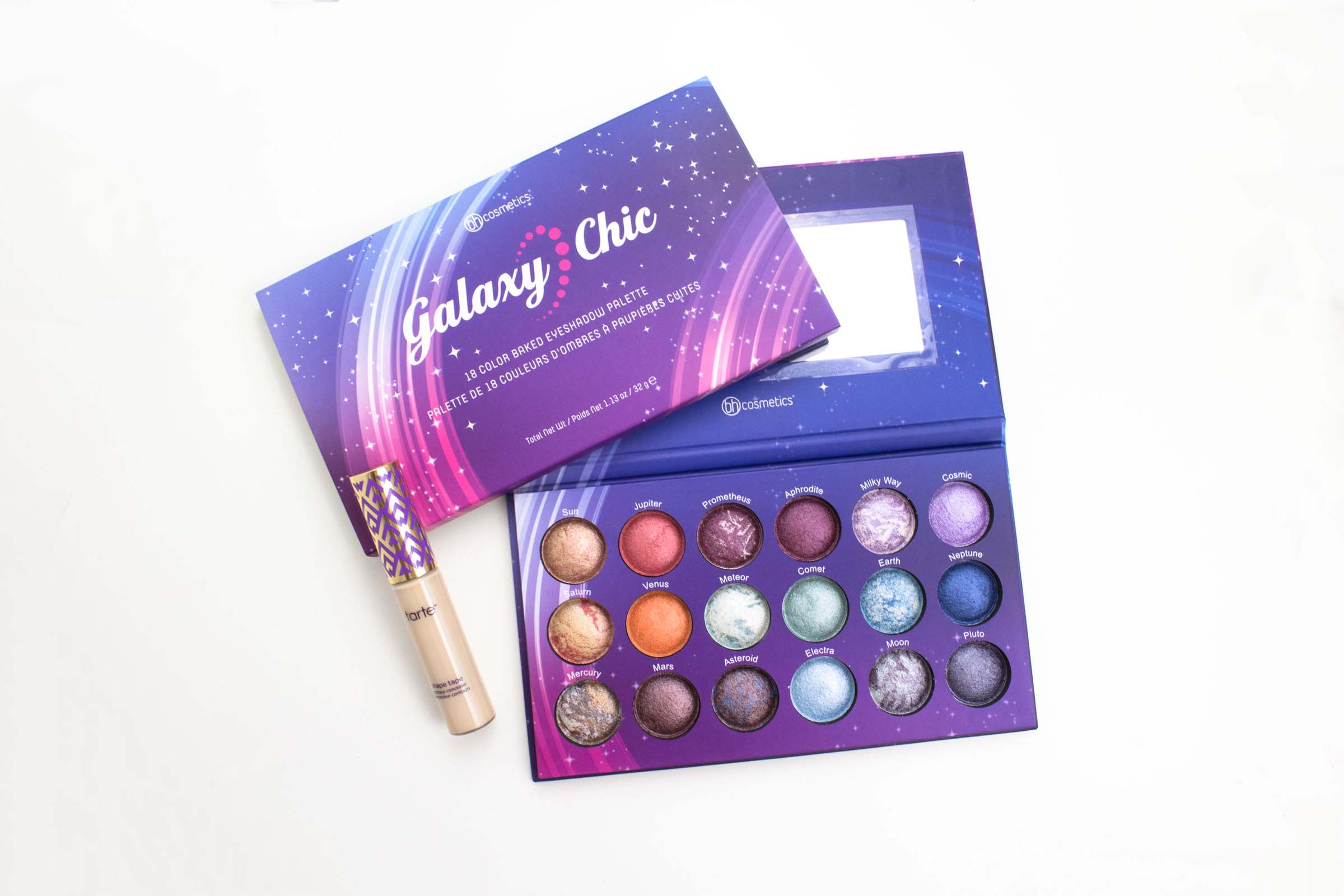 On the day of my flight back I went to Ulta. Since we were exhausted, a 40 min subway ride didn’t seem too bad. This was the worst shopping experience of my life. One employee was too busy doing her makeup to help. The other ones looked like they started working there that exact moment. I’m only noticing now after I was pretty much forced to register to their reward system (she wasn’t able to do the transaction otherwise, WTH).

The only thing I would have endured this for a whole hour was the one and only Tarte Shape Tape Concealer. It’s so much bigger than I expected. Which is great because if there’s one product I know it’s going to be tough to restock on is this. And I know a little goes a long way, So the longer it lasts, the better. Crossing my fingers the shade I got is right. Of all the times I could have gotten sunburnt in my ever-sunny country, I did in cloudy New York. Only me.

Lastly, one thing I was convinced I could never get. I had looked for this everywhere online, I honestly thought it wasn’t being produced anymore. I’ve had a crush on the Galaxy Chic palette from BH Cosmetics for such a long time, obviously for its concept. Each shadow looks like a miniature element of the galaxy and it’s just so pretty to look at. Usually not a fan of baked powder makeup, but I’m obviously going to try and do so many different looks with this one. It definitely looks like a great palette for pops of colours.