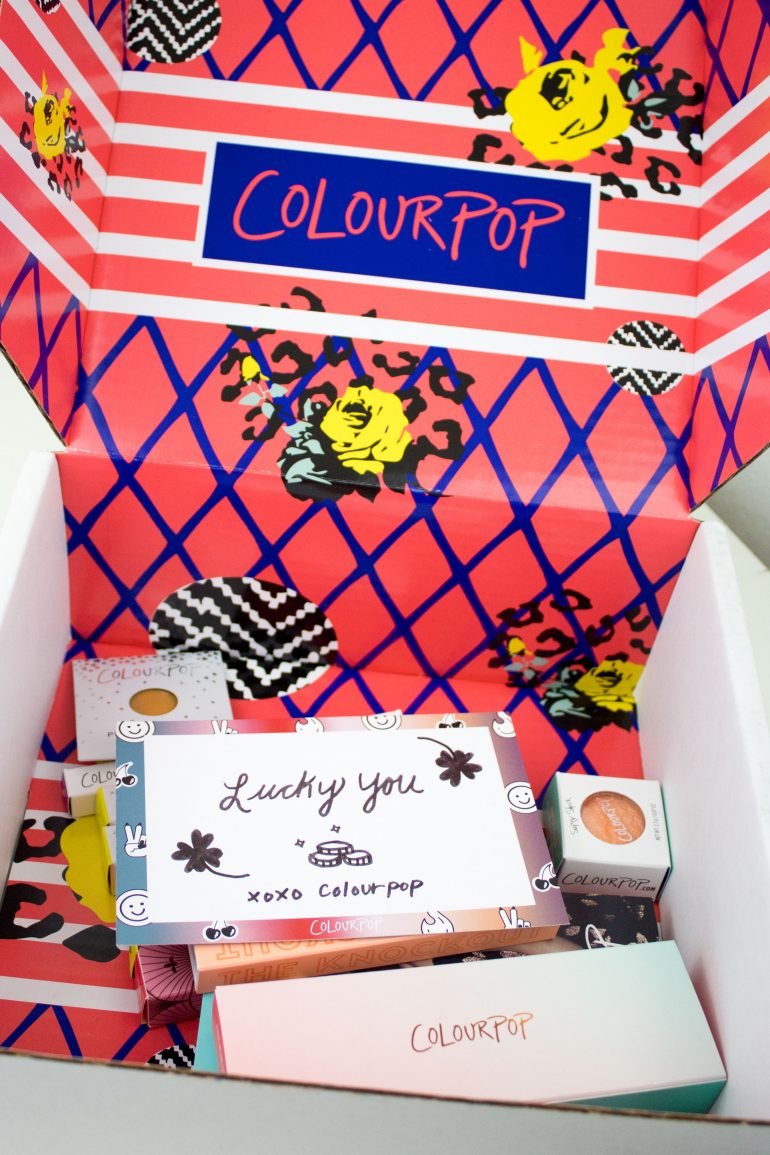 Yes, another haul… Oops?! I actually made this purchase a while ago, before both my NYX and Sephora splurges. But it only (finally) arrived last week! The order was placed on March 14th, when the first of their Spring Collection launched. It only took a week to make its way across the ocean, a lot more to get to my house.

Because I live in Italy, every package that is shipped from outside the EU has to stop by customs first. There, because in my country cosmetics are treated as sanitary products (just like medicines), has to be approved in some way.

This is the third time ordering from the company. The first time I used a shipping service, so the customs issues were expected. The second time around, everything went smooth and it left customs in a day.

Just like the first order, after a month of it sitting at customs, the mailman showed up at my house with a bunch of paperwork for me to fill out. I was basically asked to declare the contents of the box, the value, and whether it’s for personal use. Only after a couple of weeks of me sending back the filled documents the box finally left customs and reached my house. When it arrived I had to pay a fixed customs fee and VAT based on the declared value.

I strongly believe that only in my country the process is that strict and slow. That’s because I haven’t heard anything like that from people elsewhere, besides the mandatory importation fees.

Now let’s get to the long awaited products! 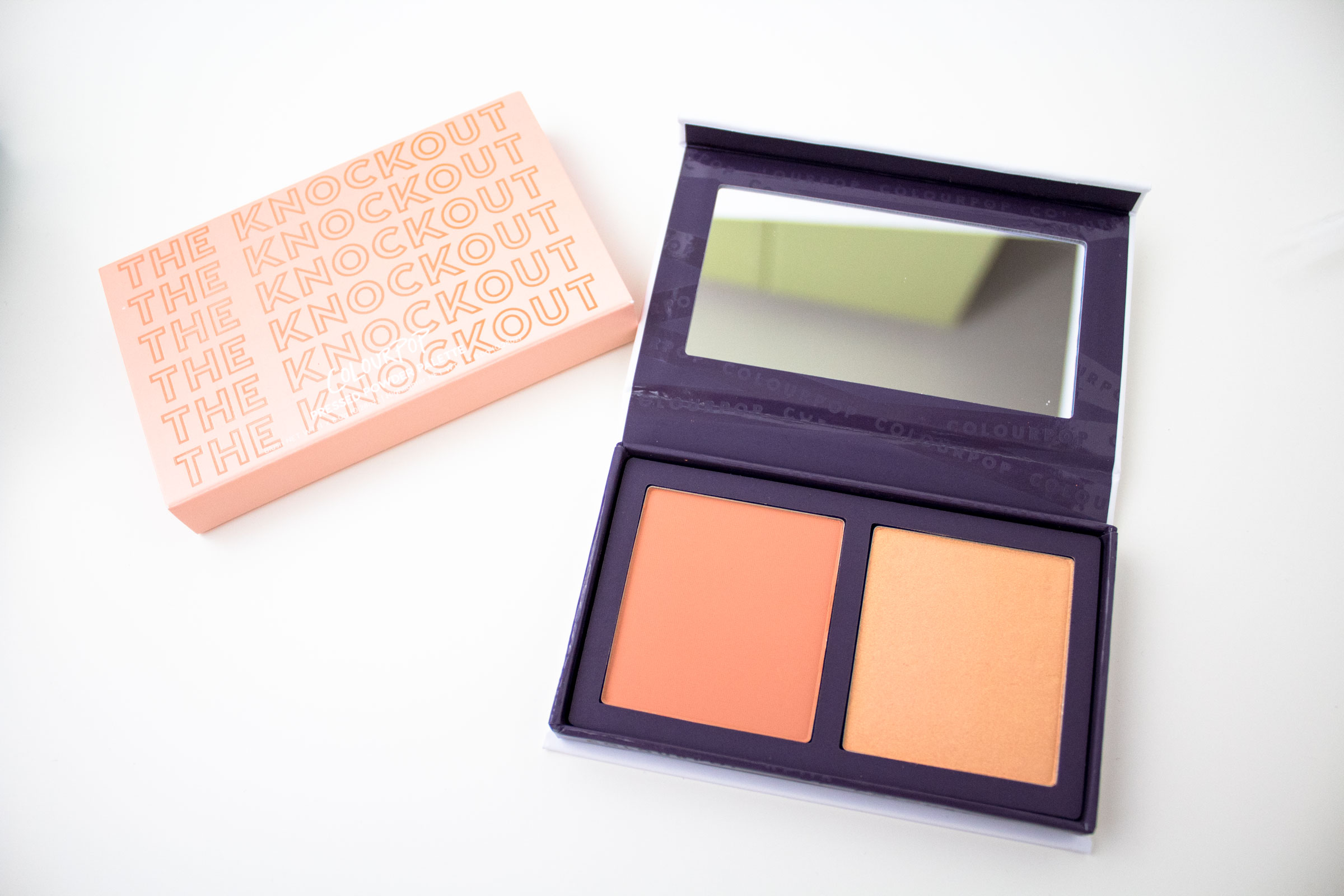 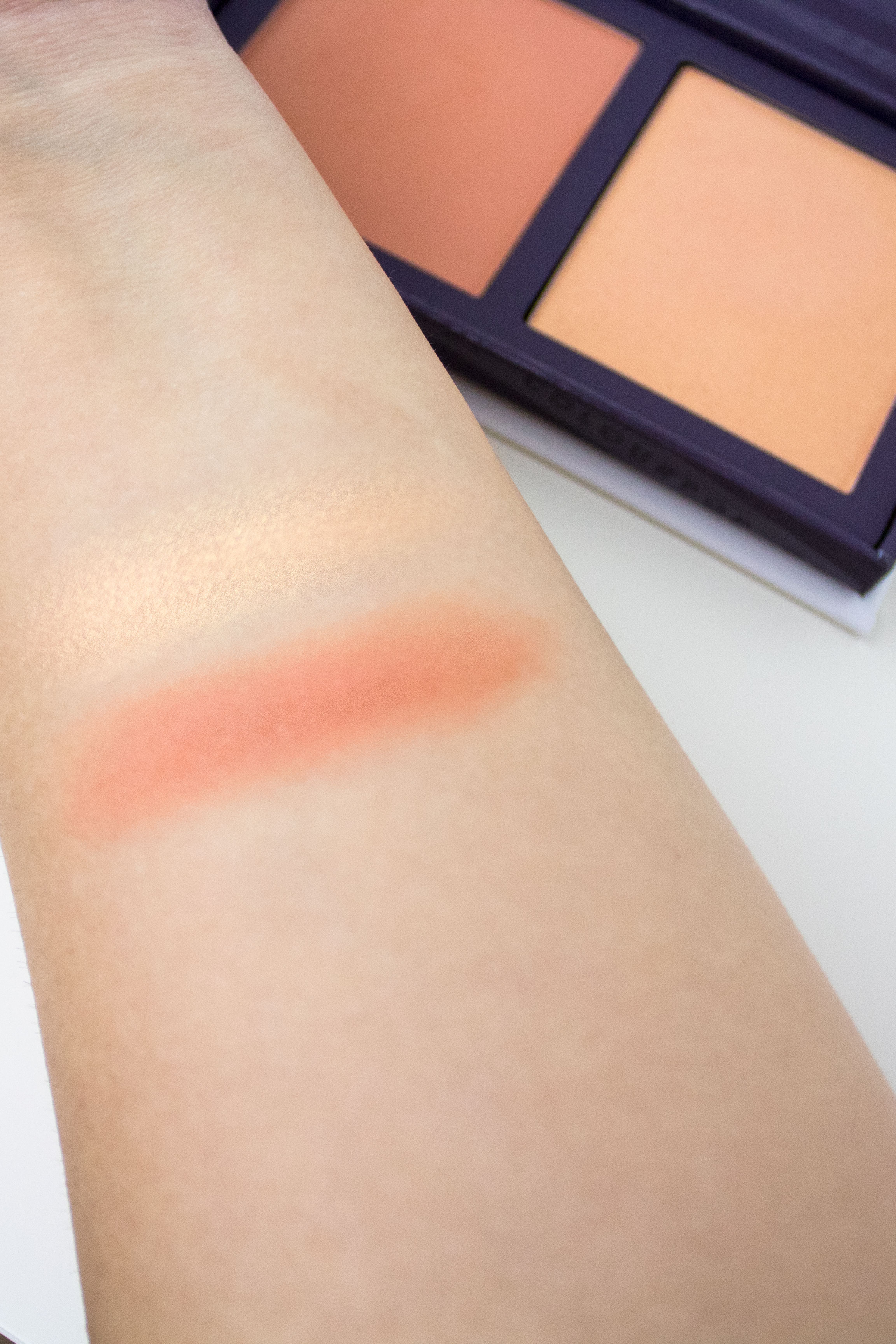 This duo includes first powder blush ever released by ColourPop. Excuse My French is a matte soft peach blush that I just couldn’t resist as I do not own anything close to it. The highlight – Like to Watch – is just as gorgeous. It’s a gold highlight with a peach undertone and it just a bit too dark for me at the moment, but with a little tan in the summer is going to be perfect. As far as the formula goes, they are pigmented but not too much. They go on smoothly and in a uniform way and blend really easily. The highlighter has tiny specs of glitter, which doesn’t bother me, but I know some people don’t like it, so I’m warning you. 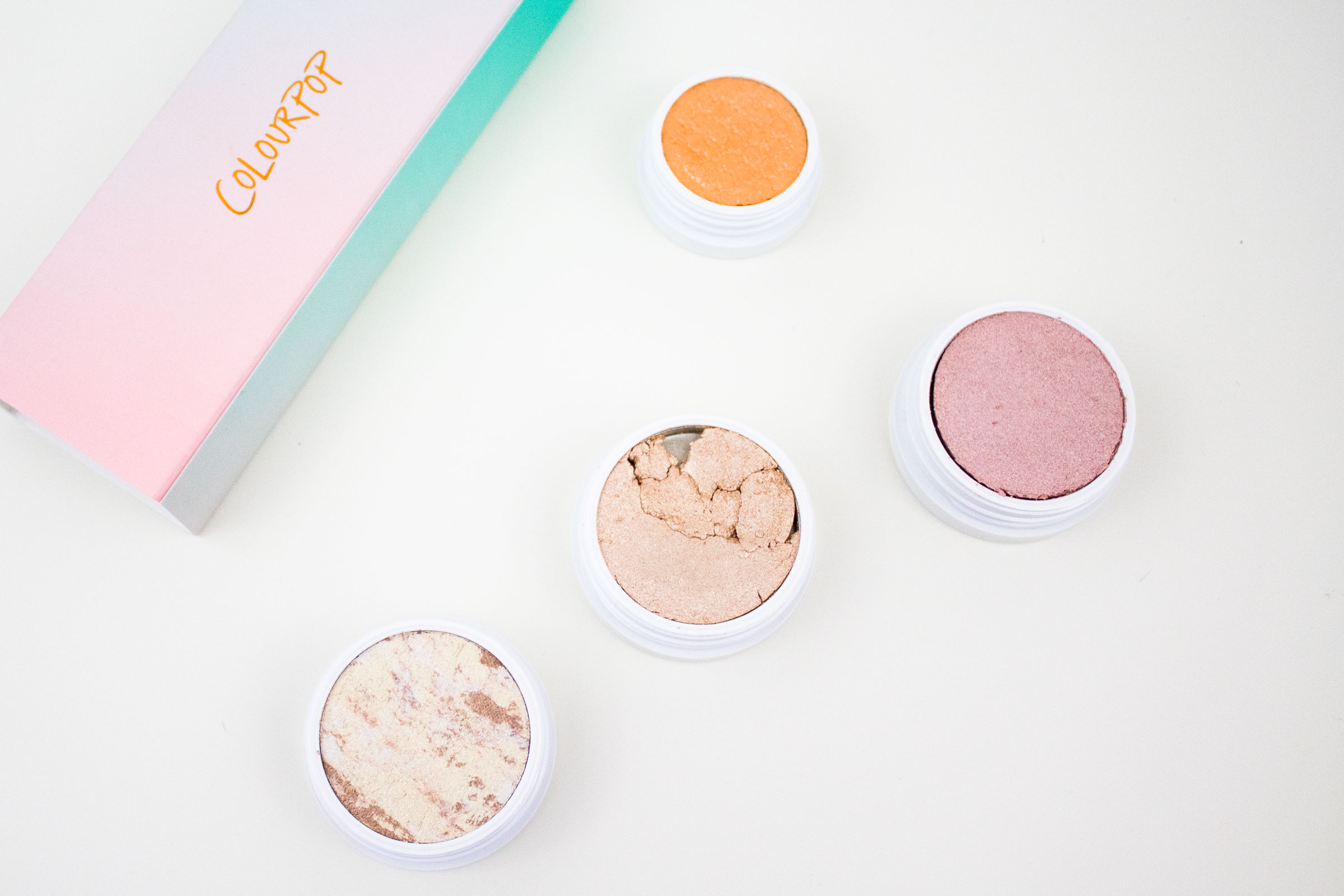 This is one of the three limited edition trios, each for a different skin tone ranges. Tone wise I was more inclined towards Cannoli, but I was afraid it was going to be too dark for me. Flexitarian is by far my favourite of the three. It’s an intense champagne, with a white reflex. The most blinding of the bunch for sure. Mine came broken, but with the unique texture of the Super Shock range, I was able to press it down with no trouble. Scrumptious has a baby pink base with silver highlight. This is the only one I have yet to try, but it won’t be long before I do. Last is Glazed which is the coolest looking thanks to the tie dye effect. This one has gold reflex with an ivory base. 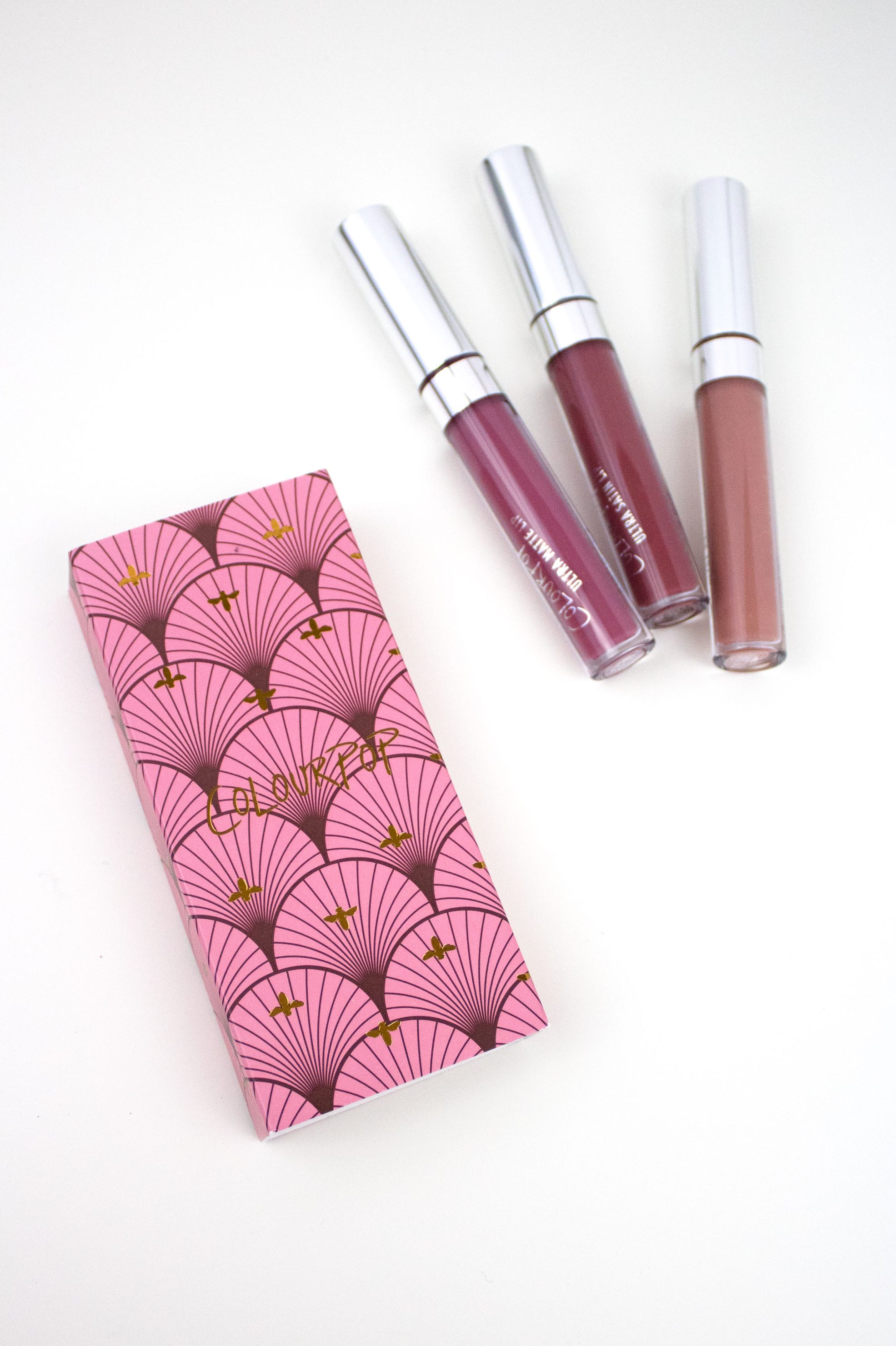 Out and About – Lip Bundle 15$ (discontinued)

I’m a sucker for dusty rose shades. This bundle includes two of those, Viper, a true dusty rose, and Baracuda, her slightly lighter warmer sister, in an Ultra Satin formula. Times Square is a rosy nude and, just like Viper, is an Ultra Matte.

The first ever Ultra Mattes Lips shades were absolutely horrible. Since then they released many more, and, I have to say, ColourPop has improved the formula so much. I don’t know if they reformulated those shades as well, but to be sure I always go for the new ones. They are far less drying than the ones I bought when they first launched. Keep in mind they’re still liquid lipsticks so they do dry down, but the new formula feels so much more comfortable and light on the lips. Most importantly they don’t flake off. Trust me, you don’t want to be walking around for a whole day with bright pink flakes all over your chin.

The Ultra Satin Lips are the perfect compromise between liquid lipsticks and cream ones. They are as matte as they can be without drying. They’re not transfer-proof, but they last just as long as liquid lipstick on me. Even though I like the new Ultra Mattes a lot better than before, the Ultra Satin are my favourites between the two formulas. 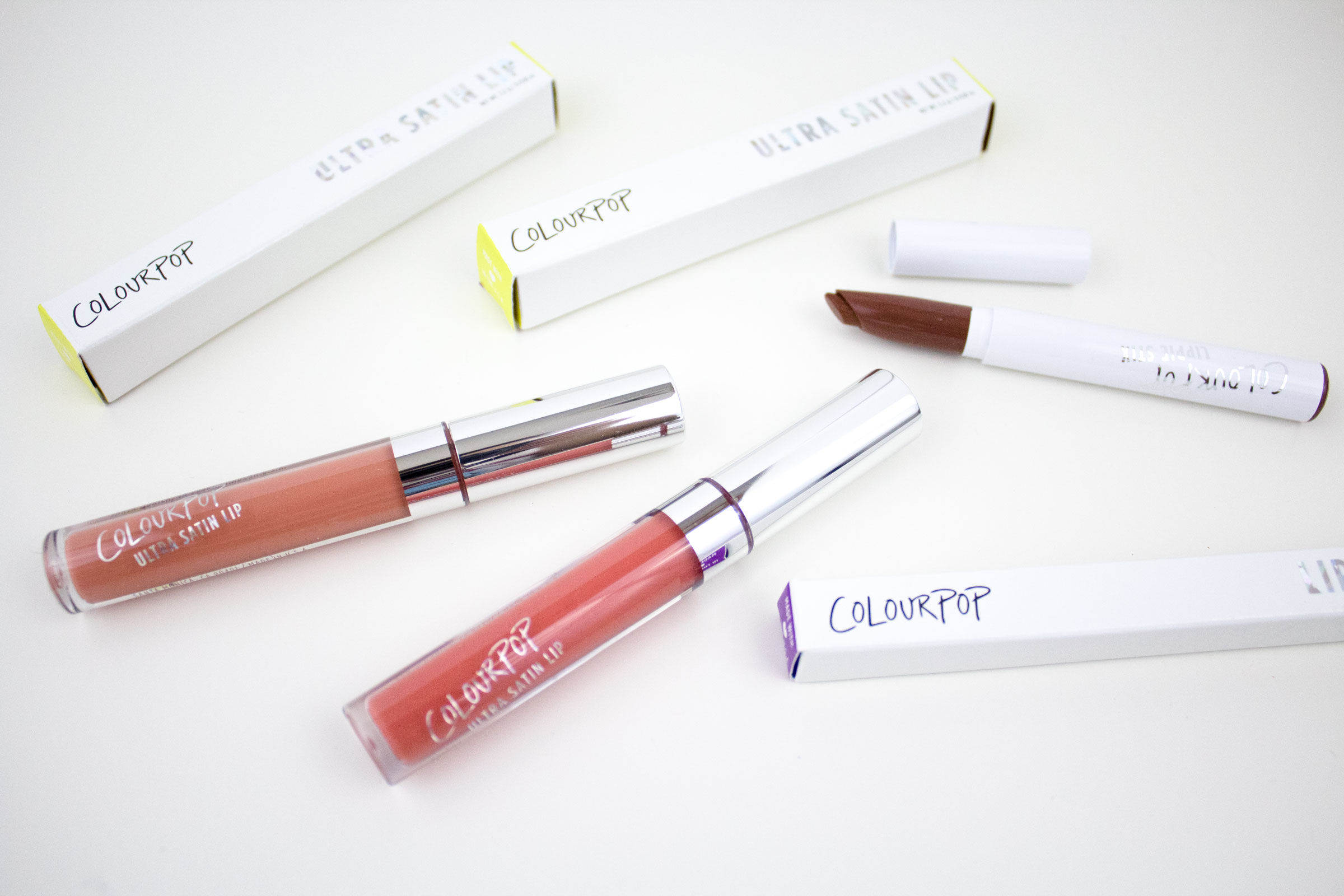 This peach lip looks nothing as advertised on the Colourpop website. I would describe it as a light peach with a neon hint. Now, I’m not used to having peach tones on my lips, but I love how this looks. The application is uniform and smooth, just like any other Ultra Satin I’ve ever tried.

Once again, nothing like the pictures on the website. It’s a straight up neon coral. I haven’t tried this one on yet, but from swatching it I can tell it’s slightly patchier than the others. Nothing I can’t work with though.

While everyone went nuts over the Aquarius side of the ColourPop x Kathleen Lights collaboration I was swooning over Taurus. Brown lips are my weakness and I couldn’t let this lippie go. It’s described as a yellow brown, which I completely agree with. The yellow in it makes it so much different than any other brown I’ve seen. The finish is Matte, which I’ve tried before and I love.

Another item I couldn’t resist is this little guy. Such a pretty mix of peach and orange, but what sold me is the wet effect that it seemed to have. Only bad thing I have to say is that the glitter fell everywhere when I wore it, but I wasn’t wearing any primer so hopefully, that won’t be a problem in the future. 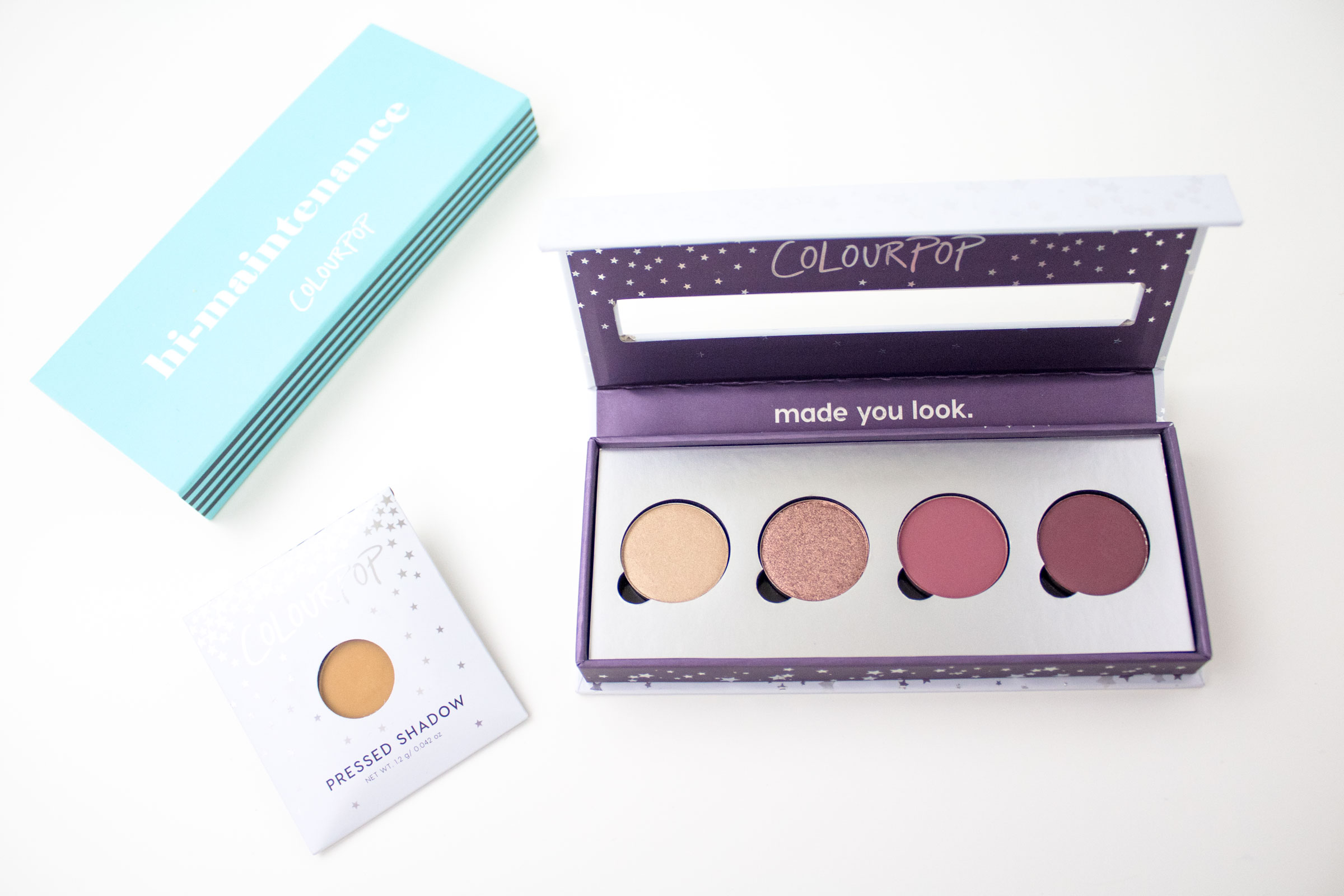 I appear to be collecting any mustard shadow I come across, this one was no exception. I still have to try the powder ColourPop shadows but they all look very pigmented and blendable. The matte ones have a little bit of a kick up, but that never bothered me.

And finally, the last item of this humongous haul: the Hi-Maintenance palette. With the many colour options that ColourPop already offers for their pressed shadows, I opted for this palette as it contains tones that I’m missing in my collection. Just in Time is the perfect satin brow bone or inner corner highlight. High Strung is a beautiful metallic rose copper and it’s nothing like I’ve ever seen before. Pictures don’t do it justice. Then we have the matte cranberry shades: the lighter Get Out and the deeper Cute Alert. The palette itself is a little too bulky for my taste, especially for 4 shadows. I have actually removed the little insert that fills it, that way I have the entire magnetic surface to fill with more pans.

So, there it is! My biggest ColourPop haul to date. Considering I basically do this once a year, and their products are a lot cheaper than most brands, I’d even say I didn’t do too much damage!

Have you picked up anything from ColourPop lately? 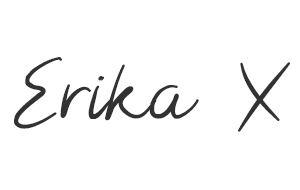